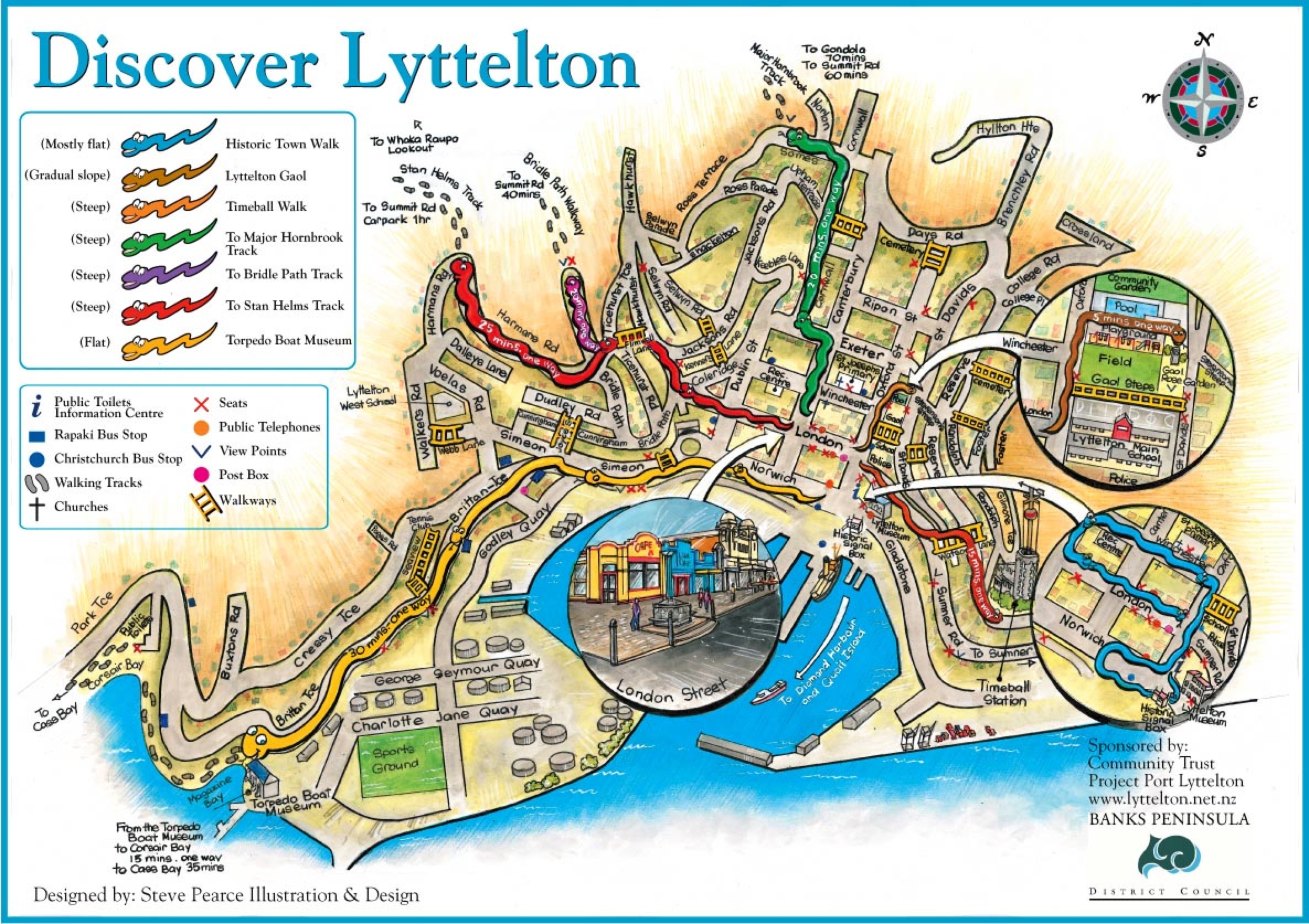 Major earthquakes are proving to be a catalyst for the Lyttelton community to create a sustainable future.

On 4 September 2010 and then on 22 February 2011, major earthquakes struck Lyttelton, the port town of Christchurch, and thousands of aftershocks still continue to rattle the community.

The port sustained millions of dollars of damage to infrastructure and to private dwellings, and the community has lost most of its dearly loved heritage buildings. Many of the buildings on the two main streets, the three old churches, and all the original hotels were damaged and will be demolished — buildings which represented the significant role Lyttelton played in the birth of Christchurch and helped give the town its quirky nature.

Heritage buildings have defined Lyttelton somewhat, and the community is shocked to have lost so much.

However, these major earthquakes are proving to be significant catalysts for the Lyttelton community to create a sustainable future now.

The town of 3000 is a close-knit community and although the ground has shaken and many buildings have been destroyed, the spirit of the people has remained intact. In fact the people are surprisingly up-beat. Lyttelton always has been a community that welcomes people, but the work of a grass roots community group, Project Lyttelton, has played a significant role in intentionally and consciously weaving the threads of the community closer together. This work has embedded in the community values and networks which have built it into the resilient and forward-thinking community it is today.

Project Lyttelton has been working on creating a vibrant and sustainable community since 2004. Through its various projects and the methods it uses to instigate and maintain these projects, the ethos of the community is evolving. By holding the systems of the natural world as a central working model, being driven by the organisation’s values, and using an ‘appreciative inquiry’ approach [1}, a ‘culture of possibility’ is noticeably growing in our town. As a long-term resident observed recently, ‘Lyttelton has changed. People no longer moan.’

Project Lyttelton is involved with a range of interconnected projects.

Looking to reduce food miles and to encourage people to eat seasonally, Project Lyttelton set up and continues to run the Lyttelton Farmers Market. The local economy has blossomed since the inception of the Farmers Market and new cafes, restaurants and a deli have appeared supplying the needs of the locals and the Christchurch customers who frequent the market each weekend.

Other projects include a community garden, walking maps, an electric cargo bike for deliveries from the Farmers Market, popular summer and winter festivals, and welcome bags for all new residents in the area. Collective purchasing power is used at times, for instance in a bulk purchase of wool insulation for homes. Appropriate causes are supported, as in a recent spray free lobby. A website is maintained and a weekly newsletter and radio show plus a monthly newspaper inform and encourage participation in the local community. All of these projects move Project Lyttelton along the direction of its vision.

One of the more profound projects that Project Lyttelton has embedded into the culture of Lyttelton is Timebanking. Project Lyttelton brought Timebanking to New Zealand, and the Lyttelton Timebank currently has about 400 members and trades hundreds of hours each month. A timebank facilitates trading between its members, and each trade is measured purely by the time it takes rather than a cash value being attached to that time. Everyone’s time is equal and therefore the skills that are offered are also seen as equally valuable. This egalitarian principle empowers individuals as it acknowledges that we all have valuable skills to contribute to our community. This empowerment in turn supports reciprocity and builds community cohesion.

The Lyttelton Timebank played a significant role in the civil emergency phase following both earthquakes here. The first earthquake was almost like a trial run as the systems between the various agencies were fine-tuned. This meant that straight after the second large earthquake, Civil Defence, Timebank, the Fire Brigade, Police, Ambulance, the Navy and the Army ran as a seamless unit, each providing their particular expertise to the community and communicating freely with one another.

The importance of the Timebank in any crisis situation is that it has already developed a fabric of networks across the community. The skills you have available in the community are known, this information is readily accessed via the Timebank software, and local residents are already practised in using this particular system.

During the emergency phase, Timebank broadcasts were made about five times a day and teams of Timebankers dealt with urgent repairs, and fed, shifted and housed other residents.

This safety net of relationships and skills was already woven into the community. Because of this, a sense of community flourished where compassion and love was the norm.

As a Timebank grows, possibilities expand and everyone can be involved because everyone has a part to play. A sense of hope and a culture of possibility infuses the community, unleashing people’s creative juices.

While Lyttelton was in the midst of the civil emergency there was a real need for people to come together, but most of the gathering places had been destroyed. There was a hunger for a sense of normality. While the City Council’s Recreation Centre was the Emergency Centre where people went to find solutions to the myriad of problems that were arising, there was also a need for people to simply gather — to talk or not, but to be together nevertheless.

The Lyttelton Coffee Company’s cafe, which before the earthquake badly damaged it was a popular place for locals to hang out and have their morning coffee, set up outside the local library. In the first few days it dished out free coffee and quickly became an obvious place for people to come. Several women, contributing what they could, brought down baking to share and supplement the coffee.

Next to the coffee stand a group of women began to gather and stitch hearts for anyone who would take them. Old blankets were cut up, buttons were sewn on and heart broaches became a symbol of the resilience of Lyttelton.

People gathered. Some joined the stitching; others sat silently relieved to be embraced by the love held by the group rather than alone at home in their damaged houses. They shared stories, gathered the latest information and asked for help or just a hug. Children joined in and families were embraced by this shared space. Over the space of a month, thousands of hearts were freely pinned on all who passed by – Ministers of the Crown, sports heroes, rescue workers and the many locals. In wearing these hearts it was as though there was a collective recognition that the hard solidness that once had surrounded our hearts had been cracked open and we were now moving forward with open hearts.

Lytteltonians feel proud of their town. The Summer Street Party had been planned for the Saturday four days after the 22 February earthquake, and even amongst the chaos and uncertainty, the party went ahead, albeit in a modified form. The tunnel was closed to non-residents and music provided by the local radio station and local musicians, along with free food, set the scene for a large private party.

In this setting, stories were gathered for the Lyttelton News, a supplement which is included in a regional newspaper each month. Using an Appreciative Inquiry approach, the question, ‘What do you find great about Lyttelton?’ was posed to the people. There was an awareness that the general media was full of disaster and brokenness and there was a need to reflect back to the people a truer reflection of who they really are.

The responses were overwhelmingly of admiration of their supportive community. People were committed to living here and committed to helping the town move into a positive future.

One many-generationed Lytteltonian laid his finger on an important change. The community had been somewhat divided between ‘old’ and ‘new’ Lyttelton. This man said he felt proud that through this earthquake experience Lyttelton had been reborn: ‘At this point onward these divisions will no longer be there; we will be working together as one.’

As the town heads toward winter, it recognises that continuing to gather for conversations is of utmost importance. Ongoing discussion is needed to hear all the ideas, explore how to move forward, and pull these conversations together in such a way that gives a sense of hope and a future that is built solidly on the wishes of the people. Evolving democratic processes in which this can happen will be essential to the success of our eventual destination. This is what a resilient community in charge of its own future looks like.

Rather than waiting on the sidelines for a Government agency to hand out solutions, Lyttelton is seeking out what its own localised answers might be. The extensive local networks and their effectiveness perhaps suggest that a few thousand people is an optimal size for effective community cohesion.

There are many ideas being voiced in the community as to how to move forward. It is difficult to know yet with accuracy what proportion of people are saying what. It is my interpretation of the wider conversation, however, that there is a desire to replace the old buildings with eco-buildings that enhance the present and lead us into a sustainable future.

Other themes seem to be emerging. Slowing the rebuilding process down until a thorough discussion has been had on where we are going seems to be one of these themes. Another is the possibility of temporary structures such as containers and yurts to help maintain community cohesiveness throughout the rebuilding phase. Others are building multi-purposed buildings which include work spaces within walking distance of workers’ homes, establishing co-operatives, planning for food security within the Harbour Basin, and constructing buildings and systems that are energy efficient and work well for us and for the planet.

There seems to be a significant proportion of people who are seeing this earthquake experience as an opportunity to move forward in the more sustainable ways that are required of us by climate change and post-peak oil .

Communities evolve as people gain confidence in their emerging collective wisdom and strength, and these open-hearted discussions and explorations of possibilities are significant steps along the pathway towards this more sustainable future.